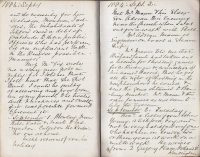 Drove Bell, Katie and Frank to Tadmarton. Called on the Rector – no one at home.

Webb returned from his holiday.

Met Mr Mann and his elder son Adrian this evening near the church when I was out for a walk with bell. Mr Adrian Mann is engineer on board a steamship.

Mr Mann told me that Richard Lamb had taken out a license for shooting game for a kinsman or connection of nis named Harris, that he got all the right of shooting in the neighbourhood he could and sent the game obtained to Banbury market. Mr Mann and the other farmers do not seem to like the system.