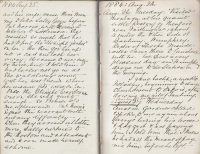 Austin Gardner called and spoke to me again about Harry’s hiring his horse and dogcart and not paying him. I told him that I knew he had not the means of paying him before he left but that he would probably send him the money in a few days. If he did not pay him I would, but only for this occasion.