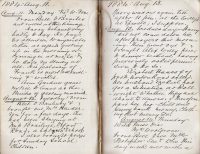 Drove Bell to see Mrs Pettipher senior who this day week met with a sad accident, having run against a projecting door bolt in the dark and destroyed one of her eyes. She is getting on pretty well, however, and is going to London to see an oculist next week.

Joe Dale’s younger child – the only one at home – a girl, who is subject to fits felt one coming on in the road. She ran home but fell on the very rough stone of the door way and cut her lip dreadfully. I saw the accident and sent off for the Doctor who came very shortly and sewed up the wound. I told Betsey Dale she should get her husband or else her landlord to take up the old broken stones and either put some better down or have none at all.

Mrs Henderson left going from here to Page’s at Swalcliffe Grange, to Lea, whence she was to be driven to Banbury by some friends who would be there.

Mrs Page’s sister, a Mrs Fox, formerly Schoolmistress at Alkerton – is schoolmistress in one of Mr Henderson’s parishes. She lost her character at Shennington, but of this Mrs Henderson is ignorant and we thought it better not to inform her.

Two Misses Lamb of Burdrop called. They brought Rosa some peaches and me a book about the Principles of the Society of Friends.