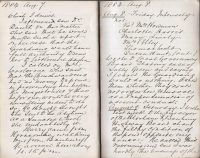 I wrote last week to the Surveyor of the Bloxham and Banbury Highway Board about the filthy condition of the pond opposite my house. He called this morning and said it was hardly the business of the Highway board to clean it out. I reminded him that the Board had done it once in consequence of an application made to them after a Vestry Meeting in Sibford Gower summoned for the purpose. He says it is not on the Highway, but on the “waste” and therefore it is not the business of the Highway Board. If it were a nuisance it would be the duty of the Rural Sanitary Authority to suppress it.

Mr Bonner called, and I told him I had written to the Local Government Board about Sally Green.

Visited Mrs Horsman. Received £51.1.10 from Simpkin Marshall and Co on account of sales of the Analytical Classical Series for half-year ending June 30th.

The cuttings pasted in the diary pages for this date are from the Banbury Advertiser of 14th August and contain a report on the Board of Guardians meeting of 7th August, which is where we have included them.