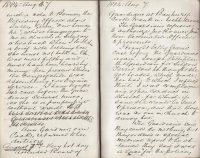 The Guardians refused to authorize John Bonner junior their Vaccination Officer, to prosecute.

The prosecution would have been of parents who had failed to get their children vaccinated against smallpox – see the newspaper report below.

I brought Sally Green’s case before the Guardians again. Joseph Pettipher the Guardian for Sibford Ferris said he thought she got teased, which made her bad, to which I replied that I was complaining of her conduct in church, for which, if sane, she would be sent to prison, and that there was no one in church to annoy her.

The Guardians said that they could do nothing, but they ordered a special medical report to be obtained. They said it was a case for the police, which I denied.

I afterward saw Dr Routh on the matter who said that he would make such a report on her case that the Guardians would have full authority to send her to Littlemore Asylum.

I called on Mr Woolgrove who said that the Churchwardens had no money to spend in prosecuting her before the magistrates and that he for one, would be very unwilling indeed to do so. He thought she ought to be sent to the Asylum as a Lunatic which she undoubtedly is.

Harry came from Ilfracombe, walking out from Banbury. He arrived here about 10.15 pm.

Banbury Advertiser, Thursday 14 August 1884, reporting on the Board of Guardians meeting of 7 August:

BANBURY BOARD OF GUARDIANS.

Mr. Fisher called attention to the case of a boy who had been sent from the house to a tailor, with a view to his learning the trade, but the master now wanted to bind him for eight years, and to pay him but 2s. a week during the last year of his apprenticeship. The boy’s uncle, who was his guardian, objected to signing the indentures, and the master said that if his terms were not accepted be would send the boy back to the House.

Several members said it would be better for the boy to come back than submit to such terms. The Board had nothing to do with it, but they advised the uncle not to sign the indentures.

Mr Ommanney said that there were in the House a woman and her daughter, and six children belonging to them, who had come over from America. The woman formerly belonged to this Union, but having been eleven years in America, he maintained that country was responsible for their pauperism. The consul had lent them over here as distressed British subjects, but under the circumstances he maintained that he had no right to do so, because there was no evidence that they would not be distressed in this oountry. The women and their children cost the Board £1 11s 6d a week, and as they were willing to go back to America, he suggested that the Board should pay their passage. This would cost about £30, and he thought it would be advisable for the Guardians to apply to the Local Government Board to sanction the payment.

Several Guardians expressed their doubts as to the wisdom of such an arrangement, because there was no proof that the women would not come back again.

The matter was referred to a committee.

The Clerk read a letter from the Local Government Board stating that an order would shortly be issued for the election of two Guardians for the township 0f Neithrop, in consequence of thelate informal election, by which the parish was deprived of two of its representatives. (Hear, hear.)

On the motion of Mr Ommanney seconded by Mr Ayton, Mr Walford’s tender was accepted.

Mr Ommanney said that in the Aylesbnry Union the printing of the statement cost £20 at first, but they got it down to £10.

Mr Chard: Are there only two tenders?

The Clerk: That is all. I sent out eight letters.

THE BOARD AND VACCINATION.—DECISION NOT TO PROSECUTE

The Clerk asked whether some gentleman would move that the authority be given to James Henry Bonner, vaccination officer, to take proceedings against all persones who refused or neglected to have their chlldren vaccinated in the Banbury district.

Mr Ommanney said he would move it, and Mr Stevens seconded.

Mr Page : Can’t we have an amendment? (Laughter).

The next part of the cutting is missing

… worst use to which the ratepayers’ money can be put.

Mr Stevens : You had better ask Dewsbury about that.

The Chairman : At Dewsbury they would not carry out the Act, but they have had to bow to the Local Government Board.

Mr Gibbs said he would propose, as an amendment, that no proceedings be taken.

Mr Ommanney : You needn’t propose it. You can negative the resolution.

The Chairman then put Mr Ommanney’s motion to the meeting, when 7 voted for it, and 12 against it. It was therefore lost, the decision being received with applause.

The Chairman : What is to be done now?

Mr Gibbs : You can’t prosecute. We are going on uncommonly well. (Laughter.)

Mr Stevens : But wait till we get the mandamus.

The Chairman : We have not done with it yet.

Mr Shepherd : At all events, for the present we are not going to vaccinate the children.

Mr Stevens : Mine have been vaccinated twice.

Mr Shepherd : And mine have not been vaccinated at all.

Mr Stevens : The Local Government Board made the Dewsbury Guardians enforce the law.

Mr Ayton : But there are thousands there who are not vaccinated.

Mr Gibbs : Ninety·eight per cent of those taking smallpox are vaccinated persons.

Mr Gibbs : But it is proved to be so.

Mr Page : If we carry this resolution for the Banbury district, why shouldn’t we extend it to the whole Union?

The Clerk : There are resolutions already authorising the other officers to prosecute, and those would have to be rescinded. Mr Bonner is a fresh man.

In reply to a question, the Clerk said he believed the Local Government Board would order the Board to prosecute.

Mr Page : Then why should it come before us ? You told me I might propose an amendment.

The Clerk : Still as the law stands, you are bound to prosecute.

Mr Stevens said he supposed the subject was brought forward as a mere matter of form. He believed they would be spending the ratepa1ers money very foolishly if they incurred any expense over a matter like this. As the question now stood, they appointed and paid an officer, but passed a resolution that he should not perform his duty.

The Chairman : What will be the end of the matter I am not prepared to say.

Mr Stevens : The Board has stulified itself.

Mr Ommanney : We have disposed of the matter, and is it worth while to prolong the discussion ?

The Clerk: Then the Board takes upon itself the responsibility of ordering that no proceedings be taken.

The Clerk: I shall have to send word up to the Local Government Board.

Mr Stevens : It is not reasonable to suppose that we can set aside an Act of Parliament.

Mr Gibbs : For the present the prosecutions are shelved.

Mr Page : We have been very dull lately, and this will stir us up for a time. (Laughter.)

Mr Shepherd : I will never give my sanction to these prosecutions for all the Local Government Boards in the world. I dare say they will shew their teeth a bit.

Mr Stevens : At Dewsbury, they had to eat humble pie, and pay a lot of expenses after holding out a time.

Mr Ayton : But, as I have said, there are thousands there unvaccinated.

Mr Stevens : But they are obliged to carry out the law.

Mr Ayton : Still the people are not vaccinated.

Mr Ommanney : Wit till they get small-pox there.

The Clerk read a letter from the Local Government Board sanctioning the appointment of Mr W. O. White, of Culworth as sanitary officer for the Union, at the salary of £130 a year.

Mr Cowper, of Boddington called attention to the fact that their Water Works had for some time been inoperative, and the people could not get water. He believed the pipes were choked up.

The Inspector said he would give the subject immediate attention.

A letter was read from Mr Selby, of Wormleighton, on behalf of Mr Beesley, agent for Earl Spencer, asking permission to take a supply of water from the Boddington Water Works to a field in the occupation of Mr Cowper. The letter also complained.about a stream in Mr Cowper’s field being impregnated with sewage matter.

Mr Cowper said he did not think it was necessary to take the water from the Water Works.

Mr Ommanney : We have nothing to do with it. It must be decided by a vestry meeting.

The matter was referred to the Inspector.