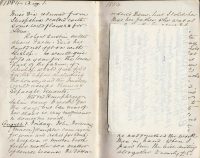 John Horsman’s (mason) daughter came again for wine and asked for soup or beef tea or mutton broth for her mother as a matter of course because the Doctor ordered them, but I told her that her father who was at work for the Trustees and to whom they were paying over 33/- per week fpr the work of himself and his boy, should provide necessaries for his wife; for tat he was in a very different position from a labourer with 12/- or 15/- a week and a good many mouths to feed. I saw Horsman himself afterwards and told him so. But as he said he was hard pressed for money, being unable to get what was owing to him in some quarters, I advanced him 10/- and did the same on subsequent occasions until he had finished the work then in hand when I paid him the bill amounting altogether to nearly £5. Bit I gave the girl nearly a pint of wine for her mother, though it is the second supply within a week. Visited her in afternoon.

Visited Mrs Shelswell. A Farm Committee met in the School room this evening at my request, present Messrs Hall, Page, Woolgrove, myself in the Chair. Mr Mann was absent though I had sent him a notice. They settled what candidates for the 2 acre pieces should be accepted; also as to certain repairs at Heath farm, tenders for which had been sent in by Poulton, Horsman and Fox.