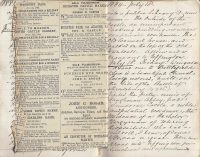 Wingate drove me to Battlefield, where is a beautiful church lately restored, built on the site of the Battle of Shrewsbury, 1422(?).

Visited pretty ruins of Haughman Abbey, past Sundorne Castle, a noble and palatial residence of a Bachelor Clergyman of retiring disposition who has a rent role, I hear, of some £80,000 a year. Then we drove into Uffington for luncheon and afterwards to Wroxeter, the ancient Uriconium, a Roman city. About half an acre of it is uncovered – but the walls were 4 miles round. The rest was covered with waving crops of golden corn. The custodian, an old man with but one leg, shewed us some tiles, Roman – of large size showing the impression of human toes, dogs’ feet, and made whilst the clay was soft.

A yellow flower, new to me, which the man called Santonine was very abundant here.