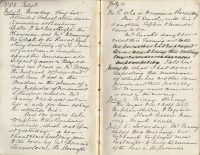 Spoke to Mr Cartwright, the Chairman, and Mr Hemming the Clerk to the Rural Sanitary Authority, of which I am as Guardian, a member, about the nuisance at Sibford Gower. They advised me to call on Mr Franey the Medical Officer and ask him to act in the matter, in the absence of an Inspector of Nuisances. I therefore called on Mr Franey and as he was not in left a note for him asking his attention to it.

Paid the year’s subscription to the Banbury Institute, which was opened yesterday  – a new and handsome building given to the town by Mr Bernard Samuelson, the Borough M.P. who is to receive a Baronetcy.

Rev T Smith, with his daughters Sophie and Maude came to tea.

Mrs Enock’s daughter called this evening and I told her what I had done respecting the nuisance of which her mother complains, and that probably Mr Franey would come over or send in the morning.