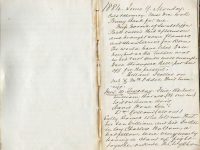 Sally Barnes who told me that her son William and his Father in law Charles Holtom, a bad fellow, were very nearly having a stand up fight together outside the Wykham Arms on Club night on account of some rough words which the latter gave his daughter Eliza, Barnes’s wife on the morning of that day, when she remonstrated with her father about his bad goings on, especially with William Barton’s wife. Eliza Barnes was so upset at the prospect of a fight between her husband and her father that she had a sort of fit which was repeated at intervals for a day or two so that the doctor had to be called in.

Rev Thomas and Mrs Smith came and stayed to tea.