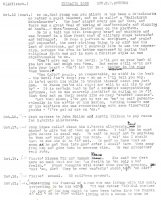 John Lines called about his Sibford Ferris allotments, said he wished to give two of them up at once. I told him he must give notice in the usual way. He said he would not do anything to them and would not pay the rent. I told him I should have to sue him if he did not. He said he knew that as soon as he got them into good order I should take them away from him and give them to someone else. He was altogether very rude.