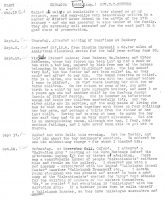 At Worcester College, Oxford. I attended a “Salvation Army” meeting at the Corn Exchange Oxford this afternoon – paying 1/6 for my ticket of admission. There was a considerable number of people “Salvationists” soldiers male and female on the gallery. I observed one with a red guernsy – embroidered with the legend “Halleluyah School Master” – another “Halleluyah Drummwell”, etc. I asked a young clergyman who was present and seemed to know a good many of the “Salvationists” whether the “Army” kept schools for the children of members or the members themselves. “No,” he replied, “but everything is ‘Halleluyah’ with the Salvation Army. If a butcher joins them, he calls himself a Halleluyah Butcher, so they have Halleluyah shoemakers and so on, that young man you allude to has been a Schoolmaster or rather a pupil teacher, and so is called a “Halleluyah Schoolmaster”. The band played every now and then, and there was a great deal of waving of handkerchiefs and clapping of hands. When “General Booth” came on the platform.

He is a tall man with iron-grey beard and whiskers and was dressed in a blue frock coat of military shape bebraided and befrogged. He read a portion of scripture and prayed and expounded, the most striking thing to my mind was his lack of reverence, and yet I scarcely like to use the expression, perhaps the idea is better expressed by saying that religious truth was put in such a familiar style as was objectionable to me.

“Don’t give way to the Devil, he’ll get on your back if you let him, and weigh you down. But worse still, he’ll get into your heart – don’t let him in – better in the pigs than there!

“You Oxford people, so respectable, so stiff in the back – the Devil don’t tempt you – oh no – I’ll tell you why. It isn’t worth his while to trouble himself about you just now. He knows you’re all right and will be all his by and by” – It is certain that he had a somewhat unsympathizing audience, but he was scarcely justified in saying as he did that they sat on their seats like so many “stuffed Mummies”.