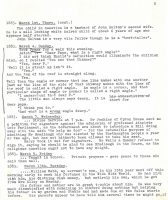 … Divine Service at 7 p.m. Mr. Jenkins of Upton House sent me a petition for signature against the admission of professed Atheists into Parliament, as the Government are about to introduce a Bill doing away with the oath “So help me God” – for the ostensible purpose of admitting Mr. Bradlaugh who was elected by the Northampton people a year or two ago, but has not hitherto been allowed to take his seat.

Harry took it out for signature. Mr. Wells a Quaker refused to sign it, saying he should be glad to see Bradlaugh in the House, as the religious question ought not to have any weight.