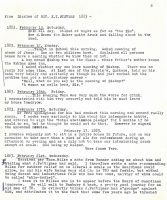 Received per Thomas Wilks a note from Bonner asking me about him and stating what J. Pettipher had said. I therefore wrote a note recommending Wilks for outdoor relief on as liberal a scale as the Guardians could allow, he and his wife being very old (he is 78) and feeble, but withal being decent and industrious folk who had two sons, neither of whom could be called “able bodied”.

I took it to Wilkes who is to appear before the Board of Guardians tomorrow. He will walk to Banbury and back, a pretty good journey for an old man of 78. He evidently thinks J. Pettipher has a “grudge” against him and attributes it to the fact that some few years ago he thrashed some beans for him. The contract price was 16/-. When he had finished and went for his money J. Pettipher and his mother said it was 14/- only and refused to pay more. The old man said Mrs. P. behaved shamefully to him, called him bad names and “nivelled” at him.

“What?” asked I, for I could not make out the word, never having heard it before.

“What does that mean?”

The man replied by pushing out his lips and making a wry face as children sometimes do. –

“I am sorry to hear it” I replied.

Then I told him I thought he was quite mistaken in thinking Mr. Pettipher was his enemy. He must dismiss such thoughts from his mind, and that in the absence of Mr. Pettipher I must believe that he would be able to give a very different account of the payment due for the bean thrashing.

Funeral of Thomas Hone, who for years lived with his family in a mud and turf hut which he built in a hollow under a hedge at Sibford Heath.

I observed William Alcock at the funeral and afterwards overtook him on the road. He was not quite so dirty as usual. Ever since my talk with him about his drunken habits he touches his hat very respectfully when he sees me, which he never did before.

“Well, William, have you signed the pledge again?”

“No Sir, but I shall some day perhaps – Still, I aint so bad as I used to be – I almost never goes to the public, but has my pint at home of an evening along with father.”

His father is a venerable looking man – ragged withal, but a pleasant fellow to talk to, whose Christian name is, I suppose, Decimus, for he always calls himself Decima, whilst the wife of the Friend for who he works as a hedge carpenter always calls him “Decimore”.

“Well, that is not so bad, William. You were at the funeral, I saw.”

“Well I hope you will think seriously about your soul – and the condition it is in – and death – and judgement – and how you will meet the Great Judge.