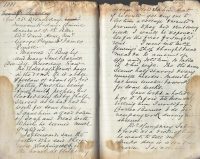 Saw the eldest of T. Hone’s boys in the road. he is a tall fellow of about 18, his father and mother being finely built people, but looked very dirty and half starved as he had had no work for some time.

I gave him a good basin of soup and bread with which he seemed much gratified.

I afterwards saw the father who said they  were sleeping in the hovel at Bilberry cottage. I told him that if he could get any one to let him a cottage and would promise to pay his rent every week, I would be responsible for the first fortnight’s rent. I went into Mrs. Hewings’ shop and bought bread and meat etc. to amount of 4/8 and told him to take it to his wife. The old man seems half starved and very unwell besides. Indeed he has been unable to work for some weeks.

Gave Webb a holiday to go to Oxford till Monday telling him I would pay Charles Barnes to do his necessary work during his absence.

Visited Humphrey Sabin to look at a rick of hay he wants to sell me. He thinks there is a ton and a quarter. I do not, and am only willing to buy it of him by weight, made up into trusses and delivered.

We held a Library Committee Meeting this evening and resolved to have the annual tea and entertainment on Tuesday next.

The Doctor called this evening when I had a long and interesting talk with him on Church principles.