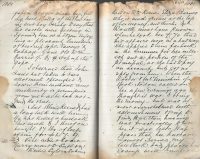 Visited Sylvia Sabin, Widow William Keene, Eliza Barnes who is much grieved at the loss of her money, and thinks Mr Routh must have known when he took her £70 that his affairs were in a bad way. She applied to him far back in the summer for her interest and a portion of the principal, as she had to pay an account, but got no reply from him. When the Doctor and Mr Minchin of Hook Norton called on her a few evenings ago she thought it was to bring the money – but was almost overwhelmed with astonishment and grief to find that their business was practically to tell her it was lost. It appears that her husband, James Barnes, my late Clerk had placed his savings with him from the first, 30 or 40 years ago, being a forehanded man. When he died these had accumulated to £30.

Met Mr Richard Lamb who walked with me across the fields from Sibford Ferris to Sibford Gower.

Joshua Lines’s wife came this evening and asked me to give her the Children’s school half-crowns out of the Penny Bank to pay her rent with, as they owed over £3. I told her I could not do that as the Trustees placed the money in the Penny Bank for the Children in order that they might have a little sum to use when they leave school and need clothing to go out to service.