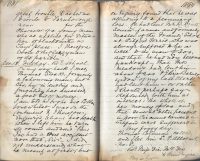 Visited Schol. On my way back I met Thomas Stock, formerly a labouring man, but who, by industry and frugality has amassed a good bit of money. I am told he broke his collarbone whilst I was on the continent and I therefore enquired about his health. When I left him he turned round and said “But I’ve had a wus accident nor that, Sir” – I did not understand what he meant at first, but on enquiry found that he was alluding to a pecuniary loss. He had lent Mr R. Routh senior, farmer and formerly Master of the Friends’ School at Sibford Ferris, who was always supposed to be a well to do man £300, and that he had now become bankrupt – that Thomas Meadows had lent him about £200 and Eliza Barnes, widow of my late Clerk had lent him – or rather I should perhaps say deposited with him at interest, the whole of her money £100 and that several other persons in poor circumstances in Sibford were sufferers too.

Thomas Coleman called and I let him S.F. allotment no. 8.