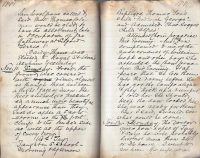 Stevens has mistakenly written “Nov” instead of “Dec” on these two pages.

Frost, the ground was covered with rime, almost as though there had been a slight fall of snow. The trees and hedges presented a much more beautiful appearance than they ever do after a snowstorm as the frost clings to the underside as well as the upper of every twig.

Attended Choir practice this evening. Miss M. Dix complained to me of the rude conduct of William Webb and other boys who attended the Choir practice this evening. It appears that she lets them into the room before she has got the lamps alight and they “kick up a rumpus.” I told her she should keep the door locked till she was ready for them. But I said I would see what could be done.