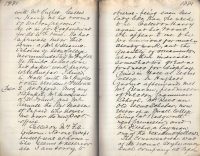 At Oxford. Met my old pupil, Mr Maclean at St John’s, and Mr Arnall the Post Master of Oxford who showed me over the new post-office.

Called on Mrs F. A. Wilson. No one except herself was at home. She seems to deteriorate I am sorry to observe – being even less ladylike than she used to be. Called on Harry at his rooms which appear to me to be too luxurious for much steady work, and the quantity of ornaments about them indicate somewhat too great a fondness for display. Dined in Hall at Jesus College. In Hughes’s rooms afterwards met Mr Beavan, headmaster of Preston Grammar School, Mr Rees an Old Jesus Scholar, now rector of a small college living at Badgworth near Cirencester, and Mr Ritchie, a layman one of the resident fellows. The conversation was of the usual style among such company at Oxford politics, philosophy, “fagging” and the Church of England being the main subjects. Mr Beavan who is considered an authority on matters of history has written a book or two, and numerous letters in the Times made himself supremely ridiculous, considering his position as a clergyman and headmaster of a public grammar school, making the wildest possible, not to say brutal remarks as to what should be done with Ritualists and with those Irish farmers who thought their landlords were too hard upon them. I think I convinced him that land was not a commodity over which a man had the same control as over a piece of jewellery or even a house.

Mr Rees is a very sensible and good hearted young clergyman who will doubtless do well.

Mr Ritchie is a very clever Scotchman – a Balliol man – quite young – but apparently an infidel, and if not an atheist, a something-else-ist that I hope he will not be for long. Mr Beavan, though he took a high degree at Pembroke some years ago, must have given Ritchie a bad idea of the sort of men who take holy orders in the Church of England. But probably he has more sense than to consider Beavan a fair sample.