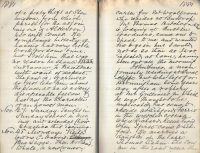 Mr Thomas Hitchcox who is lodging at Austin Gardner’s, came out to speak to me and wanted me to go in but I could not do so then as I was expected at home, having been out all the morning.

John Lines, a man formerly residing at Swalcliffe but who left for Birmingham some years ago after a robbery at Mr Gulliver’s in which he was thought to be implicated has come to reside at Sibford Ferris in the wretched cottage where Richard Keene lived when first I came to Sibford. He married a daughter of the late Thomas Sabin. She saw me in the road near the church this morning and called me by name. I waited till she came up, when she stated who she was, that she had been down to the Vicarage, and wished to say that her husband would be glad if I would let him some of the Sibford Ferris allotments. He had a horse and cart and wanted some land to cultivate. I said I would see what allotments I could let him, but that he would have to pay the rent in advance. She replied to the effect that there would be no difficulty about that as they had done well at Birmingham, and saved money.

Joseph Messenger called and asked me to let him one of the Sibford Ferris allotments. He brought the rent in advance in his hand and mentioned an allotment which J. Reason wished to give up and which he would like to have. I told him I could not promise him.