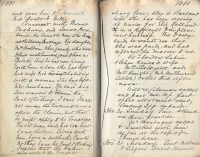 Sent notice to Sibford Ferris tenants who are in arrears and requested them to pay up this week.

Zilpah Rimell called in a little bit of ill temper to say her husband would not keep on his allotment and as he had paid his rent in advance. He did not give notice because I gave them all notice that they might have to give up their allotments at last Michaelmas. I told her I should not have said anything if he had come up at rent night and said so. But he is a dreadfully uncouth fellow and belongs to an uncouth family. His wife however ought to have taught him better manners by this time.

Thomas Priestman called to pay his S.F. allotment rent, and asked whether I could not give him something back as they had to pay rates etc. I told him the Charity was not for the assistance of the ratepayers. But I gave him a shilling with which he seemed much pleased and expressed himself grateful. It is rather a good sign when a Beershop Keeper is badly off. But perhaps his wife (late Widow Prophett) takes care of the purse.