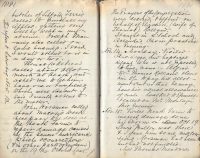 Visited Heath Farm to inspect damage done by storm on October 19. Lewis Poulton was there and I gave him some instructions. Horsman had been but had not finished.

Met Thomas Meadows and gave him 5/- towards his doctor’s bill.

Conversed with Thomas Padbury and James Hone senior, the lame old man who lives at Bilberry Cottage. His daughter Mrs Holtom and her family who used to live with him are gone to live at Epwell. And he has now living with him a son who has left his wife and is cohabiting with a woman who has left her husband. He said his son wanted to “claim” the coal and clothing. I said I could not under the circumstances allow the claim, but that he might apply to the Trustees. The old man said his son had some children living with him, born in wedlock. Could not they have the coal and clothing. I replied that the father must apply to the trustees.

I spoke to the old man about the sinfulness of his son’s mode of life. He said he had often spoken to him about it too, but it was no use, and he believed the man and woman were faithful to one another. “But do we not all sin?” asked the old man, as though to excuse his son. “Yes,” I replied, ” but not wilfully, I hope, and continuously as your son is doing.” He appeared not to have noticed the difference before.

Henry Tarver called this evening and asked me to place his name on the Charity List for coal and clothing. I told him I could not do that, as he was not born in wedlock, but that he might apply to the trustees. It did not occur to me at the time; – but his mother does not “belong” to Sibford Gower.

Visited George Messenger, and the Sibford Ferris allotments where the …

… a page has been torn out of the diary at this point.