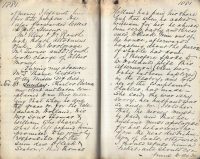 Charles Barnes, my Clerk and Sexton complained to me this morning that when he dug the grave etc for the late Edward Holland, his two sons Thomas and William who shared what he left behind him promised to be jointly responsible for the sum due to Clerk and Sexton, that Thomas Holland had paid his share but that when he asked William for his he abused him very badly and threatened to kick him out of the house, afterwards boasting about the parish of what he had done.

I therefore spoke to W. Holland’s wife this afternoon (when her baby had been baptized) in the vestry, and told her of the complaint Charles had made. She said she was very sorry her husband was so rude etc. I told her that the money must be paid and that her husband  must apologise for his behaviour before the next distribution of coals, otherwise I should refuse him a ticket, and should continue to do so and that if he wanted it he would have to apply to the trustees at their annual meeting. I said I would speak to him myself or leave her to manage him if she preferred to do so. She was very anxious that I should not as he might be rude to me – and as in that case she and her children would have to suffer for it, I very gladly left her to manage him. I told her also that his allotment rent would have to be paid up, and that she must not send her child out begging as she had been in the habit of doing. Her husband, as I said, was in constant work and was bound by law to main not only her and her children born in wedlock but also those she had before marriage.

A few days after she came and paid the allotment rent and Charles Barnes called and said they had paid him and the woman had apologised for her husband.

Yesterday I visited – Thomas Holland’s wife who is very ill from premature confinement brought on by over-exertion at allotments. Mrs Shelswell, Elizabeth Manning – whose child Florence I had found crying in the road at Burdrop when it was getting dusk and who I ascertained was “‘fraid ’cause the stars come.”

Thomas Keene the blind butcher at Sibford Ferris called to purchase my apples, gathered very well by Webb in my absence. Joseph Manning also called on same business. I said I would attend to it in a day or two.

Thomas Cakebread called about allotments at Heath, and asked me to let him have one or two pieces which were vacant. I said I would attend to the matter.

John Horsman called about mason’s work necessary to be done at the Heath Farm to repair damage caused by the severe hurricane which occurred here (and in other parts of England) on the 19th October last.

The Prayers of the congregation were desired and offered on behalf of Elizabeth (wife of Thomas) Holland.

I taught in Sunday School and attended choir practice in evening.