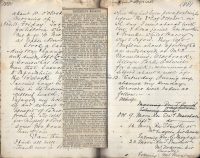 During my absence my Sunday services were taken as follow:-

The latter preached for his diocese. Mr Smith had written to me to ask my consent, but his letter reached my hotel in Rome after I had left. I have not yet received it. Mrs Sheorns, under the circumstances said she thought I should have no objection, and my people were very pleased to hear the Bishop and to assist him in proportion to their means. He had the morning offertory and also the afternoon collection.

During my absence David Hancox the landlord of the “Bishop Blaise” Inn was married elsewhere, by Banns published here. Miss Cook who keeps the post office at Sibford was married to a labourer of Epwell named Hewings, by Mr Montagu by licence.

And an elder daughter of Gaydon, farmer of The Cross, Sibford Gower was married in my church after banns by Rev T.H. Cookes Rector of Tadmarton.

I paid Mr Marshall the usual fee of £2.2 for his help in my absence and made Mr Montagu a present of a similar sum. Mr Smith’s assistance was in return for assistance rendered him by myself.

Mrs Turner took charge of the Penny Bank in my absence. Mr Elley paid Webb for me out of money I left with him for that purpose. He also forwarded letters to Mrs Stevens.

During my absence Mrs Thame, sister of the Misses Dix died.