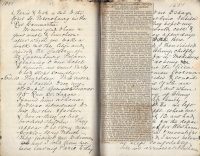 This morning I called to see my old pupil Georges de Teissier 95 Rue St. Lazare. I found him at home and was introduced to his mother and father and two or three of his brother’s children. They appear to be very nice people – very French – they invited me to dinner, but I told them we were leaving Paris today. They also asked me to stay with them next time I visited Paris and said they hoped my son Harry would call and see them and stay a few days if he came there.

Vere and I then visited the Musée de Cluny, chiefly remarkable for its Mediaeval Curios and as being located where the villa of the old Roman governor of Gaul resided and considerable ruins of which are still to be seen, and where the Monastery of Cluny was afterwards built.

About 8.30 we left Paris for Dieppe where we arrived about 12 and had to wait till 4 for the departure of the boat for Newhaven. It was a calm and moonlight night. Vere and I went below. He slept comfortably till we arrived at Newhaven about 10 o’clock in the morning.

THE ANNUAL MEETING OF THE SIBFORD TEMPERANCE SOCIETY.

The annual meeting of the Sibford Temperance Society, was held on the 4th of November in the Friend’s Mission Room. Although the day was most unfavourable, the tea and meeting passed off satisfactorily. The chair was taken at seven o’clock by Tomson Sharp, of Eatington, who, after the reading of’ a portion of scripture and the. singing of a hymn, called on the secretary (Richard H. Lamb, jun.), to read the report, which is as follows :—

“Time is fleeting, time is going, time is ebbing fast away,
‘Twill not tarry, ’twill not slumber, ’twill not for one moment stay,
Ever onward, ever forward, never loitering on its way,
So are we, we all are changing, slowly, surely, every day,”

“How forcibly we are reminded of this truism, as from year to year we meet to celebrate the commencement of this little society. Though we notice no great change in the countenances of our members from day to day, yet when we look back twelve months, and compare the present with the past, we cannot but realize the fact that time is leaving its indelible marks, even upon each individual member. Only three years have elapsed since we first bound ourselves together as a body of total abstainers, and yet what changes have taken place. Children are growing into young men and women, and are now strong in the bloom and vigour of life, young men have become more manly, and the middle-aged have approached nearer the crowning point, whilst the old are getting tottering and feeble, and swiftly nearing the end of the journey. Some of our number have left our ranks, others are labouring in distant part of the world, whilst some have been removed from us by death and laid in their last resting place. Again we find change in the position of the society itself. At first a small united body, then an increasing prosperous society, now, having spread its influence to some of the villages round, viz., Epwell, Shutford, Swalcliffe, Tadmarton. to say nothing of Whichford and Cherington, both of which have been visited by some of our members. And although our own monthly meetings, have shown some falling off in attendance, we believe that the society is still having its right place in our village. We notice with pleasure the decrease of drunkenness, and the diminished use of bad language, and claim for our society its share in having brought about this happy result. Another pleasing feature is, that whereas in time past the labourers imagined that a gallon of beer a day was essential to keep up their strength in harvest, now, many of them have greatly reduced the quality, and several manage without any at all. What has done all this? We cannot claim it as the result of great and enthusiastic meetings ; we cannot claim it as following some grand oratorial display, but we do claim it as the blessing of God, upon the plodding, persevering, patient manner in which some our members have pursued their way. They have borne the sneers of the improvident, and the cold shoulder of some former friends, while some who entered with them have been allured away, and are walking carelessly along the slippery path. Far be it from the wishes of your committee to place your society in a more favourable position than it really is, or to claim for it results that it never achieved ; yet it is anxious that all due honour should be given to it. If it can be proved as undoubted facts testify, that these villages are more sober than they were three years ago, then we claim our share of the credit, and we claim the largest share, for if before this society started, drunkenness maintained its level, and if since it has decreased, then the organization of the Sibford Temperance Society, and its influence, have been the means of the decrease. We would not claim the honour for ourselves, we are the weak and feeble instruments, let us give all the praise to Him, who giveth us the power and leadeth us on to victory.

“We will now turn to the more direct work that has been done since our last report was read.

“We have continued to hold our monthly meetings without exception, both of the Band of Hope and Temperance Society, save one, in the summer, when a. juvenile and adult meeting was jointly held. The Band of Hope meetings have—when the weather permitted—been well attended, and the children’s interest in them, appears to have been well maintained. Those of the Temperance Society, as before stated, have shown considerable falling off, not so much from loss of members, or the lack of interest in the cause in the cause itself, as from a wearying of the general sameness of the meetings. Nor is this to be wondered at, for in the midst of all agricultural population, or where outdoor labour, is carried on by the greater portion of the inhabitants, unless something inviting is held forth, the men are glad to avail themselves of their long evenings for rest, or a quiet chat by their own firesides. Though this must be said of our regular meetings, it by no means applies to those of a most interesting, and inviting kind, for instead of our annual, or tea meeting, showing a falling off, they have without exception been quite a success. At our local annual gathering, the Mission Room was full to overflowing, and we think the evenings entertainments gave satisfaction. A treat was given to the Band of Hope children last Christmas. The grand climax of the evening being reached, as valuable presents were given to each child, which had been gracefully adorning a Christmas tree. Each child came forward and rceived article of use or ornament as the case might be, according to the necessities of each ; the ladies who marked the presents being careful to so arrange them, that the more needy might recceive the most useful. The evening was a very pleasant one, and your committee would thank  most cordially, all who helped to make it so.

A meeting in the spring, addressed by David Tatum, of America, was duly appreciated, his remarks being wonderfully conclusive and undeniable.

“The funds of the society having been exhausted, an entertainment was held in the Mission Room, to help to defray the expenses by which a nice sum was realized.

“A tea was given the Band of Hope children on the 21st of June last, all the members coming from Epwell, Shutford, and Swalcliffe, making a large and imposing band. 240 sat down to tea, and afterwards games were played in a field kindly lent by Mr. Padbury. A short open-air meeting closed the proceedings.

“We must now turn to the work done in Epwell and Shutford. Our friends at Epwell, unlike ourselves, have maintained and increased the attendance of their meetings, and it is gratifying to notice the earnest zeal with which the cause has been taken up there by a number of young men and women. The testimonies they bear to the benefits they have derived from the temperance pledge are most cheering. A Christmas tree given the Epwell children was gratefully received. We take this opportunity of thanking the Primitive Methodists for the use of their chapel. At Shutford an attempt to organize a society has, as yet, been without very encouraging results. At a meeting held in the winter, and attended by Mr. Baylis and Mr. Butt, 24 signed the pledge, and at a meeting held later on, 10 more set their seals to the same, but still they were lacking in ready and earnest workers. And so from inability on the part of our own society to carry on the work this summer, we fear the ground gained has been practically lost. We hope, nevertheless, to be able to go on with the work during the coming winter.

“During the past year our numbers have increased by 43 senior and 77 juvenile members. Though we are very glad of new faces, and would encourage all to sign the pledge, yet we do not look to that as a certain proof of the work or good that a society may be doing. There are times when excitement—sometimes caused by a persuasive and eloquent address, sometimes caused by a kind of epidemic—seems to influence numbers to sign the pledge, but afterwards a large proportion soon fall away.

“The real work of a society is the lasting effect that it has on those around it. It may not end in their joining themselves to the society, but still, if there is a hidden work going on that tends to moderation, and in some cases the giving up entirely of the dangerous cup, then that society is in a healthy state. And again, the morals of a whole community may be improved by a little band who are careful to set a good example. We would encourage all our members, by their conduct in the fields, by their conversation and conduct at home, by their whole carriage and general demeanour, to set such an example, that others seeing their morality shall follow safely in their steps.

“In bringing this report to a close we would earnestly press upon our members, the desirability of increasing, rather than slackening their aid in the propagation of this good work, and that each one should take their right share of the labour, remembering that God helps those who help themselves, and that to him that overcometh is the promise given.

“The field for work is great, the harvest truly is ready, but the labourers are few ; let us pray then the Lord of the harvest that He will send more labourers into His harvest.”

The treasurer (Joshua Lamb) then read the balance sheet bowing an income of £2 11s. over the expenditure.

The reports having been adopted, the Chairman addressed the meeting for a time, concluding by calling on Mr. Skinner, of Oxford (agent for the United Kingdom Alliance) for an address. This he gave in a very interesting, instructive, and amusing way, touching on the various positions taken up by the temperance advocates of the present day, showing the great advance that had been made since teetotalism was first advocated.

Mr. Baylis, of Banbury, in his usual penetrating way, pleaded with his audience, as Christians, to give up once and for ever the intoxicating cup, for the sake of their fellow-men, many of whom seemed unable to stand against it.

Votes of thanks to the chairman and speakers and the singing of a hymn closed a very interesting and enjoyable meeting.