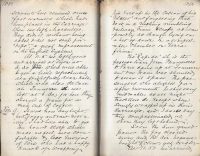 It was now daylight, but a foggy and raw morning. I had been able to get an hour’s sleep which made me feel more comfortable and less envious of Vere who has a happy knack of wrapping his ears up in the collar of his “Ulster” and forgetting that he is in a rushing rumbling railway train sleeps as composedly as though lying on a bed of down in a comfortable chamber on “terra firma”.

The “Rapide” which is the fastest train from Marseilles to Paris came up at Tonnerre and our train was shunted to allow it to pass. The passengers who alighted for a few moments looked very miserable, as all night travellers do, except when snugly wrapped up in their carriages, and I dare say they compassionated us whom they left behind.

Soon the sun gained power the fog cleared away and the air became bright and clear, yet brisk.

At 11.50 we arrived in Paris and took a cab to the Hotel St Petersbourg in the Rue Caumartin.

We were glad to have a good wash and luncheon after which we took a walk into the city and visited the Gallery of the Luxembourg Palace. Returning to our hotel to dinner, we went early to bed, slept soundly.