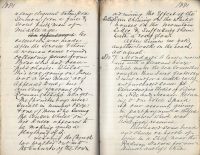 A lovely morning with a pleasant breeze which made the sea somewhat rougher than it was yesterday. I went out for a walk early and purchased some stereoscopic slides of views in Nice and Monaco. Returning to our hotel I paid up or account giving in part payment a cheque of my own which was willingly received.

Purchased some bread and cheese and a bottle of wine in a shop near the Railway Station for our dinner, and left Nice about mid-day for Marseilles. We passed through the Western Riviera, a very charming country abounding in hills and valleys, the former clothed with olive trees, pine woods and vineyards, the latter cultivated and dotted with well built villages. At 3.50 pm. We arrived at Cannes which was “made” by the late Lord Brougham who spent most of his time here for some years before his death. The neighbourhood is one of the most charming I have seen, and for several miles we pass among pine forests, palm trees, orange groves, olive yards and vineyards – cactuses, aloes and roses abound – and a species of pine with a flattish top struck me as particularly umbrageous and handsome.

At 5 pm we arrived at Frejus an old place with some interesting Roman ruins of considerable extent and consisting of fortified walls, a castle an amphitheatre etc, some of which are visible from the Railway. There are apparently no modern houses, and it is not directly on the sea.

At St Raphael, the previous station, Vere was nearly left behind, as the train was already in motion when he sauntered up with his hands in his pockets “as cool as a cucumber”.

We arrived at Toulon at about 7.30 and on leaving were joined by three or four French man of war’s men – who, in their cleanliness and almost gentlemanly bearing contrasted very favourably with our own Blue jackets on furlough. They were, however, not nearly such hardy looking men as ours.

We arrived at Marseilles at 9.30 pm, found our omnibus awaiting us at the Railway Station, and in a few moments were seated at supper in the Grand Hotel de Marseille in a wide and busy thoroughfare leading down to the docks.

The upper part of the hotel is commodious, and good in every respect, and no fault could possibly be found with our rooms, but the “salle a manger” is a somewhat dingy and stuffy place giving one the impression of an hotel which has seen its best days.