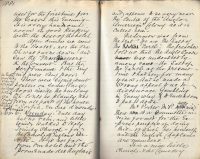 Dull day but no rain, and little wind. Walked to Holy Trinity Church – for the Church of England service. It is not far from our hotel and the promenade des Anglais and appears to be very near the centre of the “Anglo-American” Colony as it is called here.

The sermon was from the text “Ye are the Salt of the Earth”. The preacher told us that the Anglo Saxon was undoubtedly – among races – the Salt of the Earth at the present time and had been for many years, and he made a strong appeal to us to discourage gambling in every way and to endeavour to put it down.

Mr Porter MP tells me there is a committee in Nice formed for the express purpose of doing this – of which he himself and the English Chaplain are members.

It is a nice little church and the cemetery adjoining it is pretty and interesting from the number of English names, some well known – recorded on the tablets and tombs. The most notable being that of the Rev F. Lyte (died 1847) for 25 years Rector of Brixham in Devon, author of the beautiful hymn “Abide with me, fast falls the eventide.” A clergyman pointed it out to us and I to another clergyman and his wife who had evidently made a pilgrimage to the spot. Certainly a great lump arose in my own throat when I thought of the large number of the good and brave of my fellow countrymen and countrywomen who having come so far from home for the benefit of their health, had here lain down and died.

After walking around this pretty God’s acre once or twice and admiring the roses and other flowers on bloom – all being in good negligent order if I may so say – where we saw some men and boys fishing, a hopeless task it appeared to us – for there was enough noise of conversation to alarm the finny ones for a considerable distance. Then we went to the old port and walked round the harbour, and returning to the newer part of the town entered the Church of Notre Dame – a rather fine, quite new, building – where we heard though we did not understand what appeared to be a very eloquent extempore sermon, from a fine and stout built man of middle age.

A collection was made after the service and then a woman came round collecting pence from those who had occupied chairs. Whilst this was going on there was a “low mass” as it appeared to me, but I am very ignorant of Roman Catholic usages. The chorister boys were small in number and size and one of them who swung the censer whilst on his knees appeared to be making quite a plaything of it.

Leaving the Church we walked out into the suburbs of the town admiring the effect of the setting sun shining on the white houses on the mountain sides and suffusing them with a rosy glow.

After dinner we took another walk on the beach as usual.