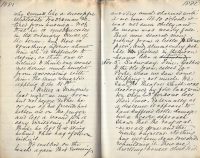 Fine. Walked to the old town, called “La Porte”, where we saw some shipping – not much. We saw also the theatre which was destroyed by fire last winter when 63 persons lost their lives. Externally at a distance it appears to have suffered little damage but a nearer approach shows that the roof is almost all gone and the inside burnt out. Nothing has yet been done towards rebuilding it. There are dwelling houses close to it which do not appear to have received any damage.

About mid-day we took train for Monte Carlo, the celebrated gambling place in the Principality of Monaco. It was a charming ride through many short tunnels and along the shore of several lovely little bays where the sea was delightfully blue and clear, and the rocks covered with olives, palms, vines, oranges, trees etc wherever earth sufficient could be found added much to the beauty of the scenery.

At Monte Carlo which has a Railway Station to itself a short distance beyond Monaco, the hand of man appears to have done everything possible to add to the natural beauty of the place. It is the side of a mountain, facing the sea, and laid out with walks, flower beds, shrubberies, level walks and steep walks, villas, fountains, cascades, and dales, backed up by the grey mountain. In front is the blue sea and to the right the town of Monaco on its shoulder of rock running out about half a mile into the sea.

We received tickets for the gambling halls on presentation of our cards, and visited the six or eight tables in them, all of which were fully occupied by men and women playing, if playing it may be called where all seemed so dreary – at Roulette and other games of which I do not know the names, and have no desire to know – for a more uninteresting lot of people – and a more uninteresting performance I never saw before. The rooms are very handsome and adorned with good modern paintings – five or six croupiers etc presided over each table – the games were very rapidly played – the Roulette being started perhaps thirty times in an hour, and at each stoppage of it, the croupiers raked a great quantity of money to themselves, passing very little indeed to the players. They however – for such is the fashion – manifested no excitement whatever whether they won or lost. One young man standing near me as I looked on at the Roulette staked a small piece of gold, won, staked his winnings, won again; staked again and won again – pocketed his handful of gold and walked off, the croupiers in vain inviting him to go on – He said he had got enough – I was much amused, but commended the young man’s firmness in my own mind. This gambling however is a pitiful business. Not one of the players looked happy or healthy. There was a notice posted in the building to the effect that the proprietors (the Executors of a Madame Blanc, who left her business to be carried on for the benefit of her 3 daughters all married to princes or noblemen and who clear £350,000 a year out of the concern) could on no account lend money to players nor allow anyone to play “on tick.” Another notice bade us “beware of pickpockets” – Another that no canes or sticks were to be taken into the gambling halls and another to the effect that no inhabitant of Monaco was to be admitted, nor any inhabitant of the Department of the Alpes Maritimes except members of the Chief Clubs.

There was evidently plenty of money being lost and plenty won – a paragraph in a newspaper states that one night last week a German prince whose name was given won £8000. Some persons lost that money, and losers are numerous of course, and sometimes become desperate. I was told that there is on the average one suicide every fortnight at Monte Carlo.

The men and women players however looked very miserable – as well they might – for they got no fun at all for their money. I was never less inclined to risk sixpence at play in my life.

Mr Porter, M.P. had recommended us to go to the Hotel de Paris at Monte Carlo for luncheon and he praised the place very highly. So we went there – It is a very grand building – but that did not satisfy our hunger, and we had a poor luncheon, the celery being full of live worms which caused me to speak a bit of my mind pretty freely to the waiters – though poor fellows, I don’t suppose for a moment it was their fault – my remonstrances were however taken to the lady presiding at the counter.

They did not put that celery down in the bill, nor the worms either, but it was big enough without them.

Usually there is a theatrical performance and a concert here in the afternoon in suitable and beautiful buildings. But we could not find that either was going on today – and inferred that owing to the Festa of Monte Carlo yesterday the actors and musicians were enjoying a well-earned holiday. Moreover we should not have remained for the evening as we preferred getting back to our hotel to dinner. We therefore left about half past 4 or 5. The lights of the ships in the bay, of the houses on the shore and of a lighthouse, and of the moon and stars above – of various colours, red, blue, white and green were very pretty, and their beauty was increased tenfold by their reflection in the sea penetrating its depths apparently in ling straight lines.

We dined in the Grand Salle a Manger used for the first time for the Season this evening. It is a very handsome room in good keeping with the rest of the hotel.

After dinner we went to the theatre, not the one which was burnt down! and saw the Musketeers in the Convent. But the performance and the singing were very poor. An English young lady staying at hotel had been brought up at a convent school and was much amused.

There were significant posters on some large doors inside the building which could be plainly read from all parts of the house “sortie, en cas d’incendie”.