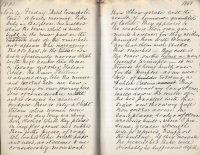 “Hotel Cosmopolitain.” A lovely morning – like July in Brighton. We walked about the town, which is well built in the newer part on the western side of the river bed – and appears to be increasing. The old part, to the east consists of extremely narrow streets with high houses like those in Genoa and other Italian cities. The River Paillon is almost dry, like the numerous torrent beds we saw yesterday on our journey here. It is of considerable width and is crossed by several bridges. There is only a slight stream where women were busy all day long washing their clothes which they placed on large flat stones and rubbed them with pieces of soap which looked like brick bats and used, as it seemed to me considerably more soap than elbow grease with the results of immense quantities of lather. They appeared to be washing their own garments however, for they neither pounded them with stones, nor beat them with sticks. This river bed – they call it the river on the lucus a non lucendo principle – is in process of being built over for the purpose – as we were told – of erecting a public casino. They are constructing long stone walls down the centre of the bed parallel with the sides and throwing huge iron girders across. In some places arches of stone are being built where I presume, greater strength will be required to support the building. If they excavate the present bed there will probably be sufficient depth and width to carry off any quantity of water likely to descend from the mountains. It would seem that some diversion of the river nearer its source has taken place since the present bridges were built, as there does not appear to have been any considerable quantity of water for several years.

The tram cars here are numerous, good and cheap and appear consequently to be much patronized by the inhabitants.

At 3 pm we made our way to the sea where is a good promenade with gardens called the “Promenade des Anglais.” A pretty good band was performing a selection of music to which a considerable number of persons were listening, though “the season” has barely commenced. The palm trees and other tropical plants give quite a tropical character to the scene. We walked or rode nearly all over the town today, finding our way about very easily.

At Table d’hôte we made the acquaintance of Mr Pother, one of the members of Parliament for Rochdale . He is a large and rather important man of proletarian views and I should think not a “gentleman”. Mrs Pother is a very quiet person of rather pleasing and lady-like manners. There was also another Englishman with his wife and two daughters with whom we scraped acquaintance who seems like a successful wholesale merchant tradesman retired from business – not that he is uneducated in the ordinary sense of the term – but there is something inferior about him which is difficult to define, so that one is inclined to think one would not derive much benefit from associating with him – the same remark applies to the M.P.

Stevens later refers to the Mr Pother MP as “Mr Porter”, but he was probably Thomas Potter.

I killed a mosquito last night in my room but not before either he or one of his friends had bitten me on the finger and left a wound which is very irritating. I should think he left his sting behind and his bag of venom with it.

We walked on the beach again this evening and very much charmed with it we were. At 10 o’clock it was not even chilly, and the moon was nearly full. There were several men fishing from a little stone pier, and almost every pebble glittered in the moon beams like a jewel.