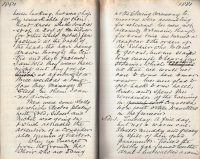 A fine day, but not a warm one. Streets muddy and greasy in spite of their good pavements. Visited the justly far-famed Cathedral – we walked around the outside and looked up to the many pointed roof. We walked inside and clambered to the top and walked all over it. It is certainly the most beautiful building, externally, I ever saw.

Near one of the doors – of the south transept, I think is a fine statue of St Bartholomew – flayed – walking with his skin, even to his scalp and his feet thrown over his shoulder as a man would carry a cloak that he was not wearing. It is said to be the best piece of statuary in the Cathedral, and its date is 16th century. It is a fine anatomical study. On the pedestal is the following inscription “Non me Praxiteles sed Marc ‘finxit agrat’.” ? What does agrat mean. (It is for Name “Agratus”).

Divine Service was going on in the Cathedral when we entered. There were numerous priests in white mitres, a good choir and about 1500 to 2000 people. On the high altar were some busts, probably of saints, as it was All Saints’ day – all with white mitres on their heads.

The roof is painted to represent open stone work and so effectively has this been done that for some time Vere and I could not be certain which of the two it was, though we examined it with great care. It was only in one place where the painting had received an injury that the deception was made apparent.

In the East End of the Choir and about 2/3 up to the lofty roof is a chest which we were told contains a nail of the true Cross presented to the Church by S. Ambrose. Before this a small lamp, suspended by a chain from the roof was burning, which looked like a star hovering above the altar.

Around the huge columns right and left of the entrance to the Choir bronze pulpits are carried covered with figures in high relief, and supported by figures of the Evangelists and doctors of the Church. These pulpits were silvered and gilt (so the guide said. I think he must have meant that the pulpits were made at his expense.), as I understood, at the expense of Maximilian who entertained the Emperor of Austria in Milan in 1859 just before his departure to become Emperor of Mexico under the auspices of Napoleon iii, where he was soon afterwards shot by his rebellious subjects. His widow became insane and is dragging out an unhappy existence somewhere in Belgium.

The clergy in Milan and for 10 miles round are not under the same rules as other Roman Catholics, adopting what is called the Rite of S. Ambrose. They are allowed to marry, wear beards etc.

The Church looked darker than usual today being hung around with tapestry pictures for the festival of S. Carlo Borromeo, which takes place on Friday next.

We were invited by a tout of respectable appearance and manners to visit the tomb of S. Carlo Borromeo at the price of 5 francs for the two of us, and as this is the sight of the interior of the Cathedral we accepted his invitation. Descending some steps we were furnished with candles by a showman in black cassock and short laced surplice. A few stairs brought us into the Chapel of the Saint which is perhaps 18 feet square or rather octagonal with a vaulted ceiling which with the walls is decorated with reliefs in solid silver representing the chief scenes in the life of the saint. He was born 1538? made Archbishop at the age of 22, and died at the age of 46. The chief reliefs represent his baptism, consecration, almsgiving, administration of “the Sacrament”, attempted assassination, procession through Milan during plague, his death and his canonization.

Above the altar is the sarcophagus of rock crystal and the silver protected from the gaze of the casual visitor to the chapel by a kind of iron shutter which the guide pulled down with a stick. The body of the prelate is seen within, a ghastly object dressed in his archiepiscopal robes, and with the crozier by his side. The hands are gloved, and outside the gloves are numerous diamond and other rings, and many costly crosses and chains of gold are disposed about the body in various ways. There is one cross of emerald suspended above the breast of the corpse which was presented by the Emperor of Austria(?) and which cost 500 000 francs £20,000. The showman somewhat disgusted me with the carelessness he displayed in dropping the grease from his candle on the lid of the casket in which the body lies.

Mounting to the roof we had a splendid panorama stretched out before us, though the weather was somewhat hazy. On a clear day Monte Rosa, 100 to 110 miles away, Mont Blanc 120 to 130, Jungfrau, S. Bernard and Mont Cenis, 150 miles, are visible from this roof.

The number of pinnacles each crowned with a statue is surprising. There are, our guide told us, already 3500 statues, and there are to be 2500 more. For each statue 1000 francs are paid. They are of various degrees of excellence, but like the building itself are all of a white marble, the Cathedral Chapter owning some quarries which were bequeathed to it many years ago for the completion of the building.

There is a most elegant tower of open work which we were told was built at the foundation of the Church (1386) and designed by Raphael? The whole is so little impaired by time that it is too brilliant to be looked at when the sun shines upon it.

One of the finials is adorned with a statue of the Emperor Napoleon I in Roman Costume, executed by Canova.

We were told that those on the first roof were 2 fingers above life size, those on the next stage 3 fingers, and so on.

Descending to the body of the Cathedral again we saw a fine bronze statue of Giacomo Medici one of Charles V’s generals whose sister was the mother of C. Borromeo. It is the finest bronze statue here. We saw also a very fine candelabra in bronze.

In the Chapel of the “Virgin of the Tree” is a very fine oil painting and near it a stained glass window representing te twelve apostles with the date 1567. It is a grand window and is in a perfect state of preservation.

Our guide pointed out to us under glass the cross which was carried by Carlo Borromeo in procession through the streets of Milan at the time of the plague which ceased two days afterwards. It is held in great veneration. Let into a wall in the nave we were shown some pillars said to be of 6th century workmanship and brought from elsewhere.

Near the W. door is a large porphyry vase found as S/ Lorenzo, in the city, where the Ruined Colonnade stands, on the site of Nero’s Bath. It is now used to preserve the baptismal water and kept covered up, which reminds me that our guide told us the priests under the Rite of S. Ambrose dip the head of the child to be baptized into the font.

There is a meridian of brass in the floor along which the sun shines through a little hole in the roof on a certain day in the year.

Some of the West doors were finished by Napoleon i in a style very inferior to the rest of the building. We were told they were to be removed and replaced with better ones.

Leaving the Cathedral with regret – for it is probably, as the Milanese consider it, the finest Gothic building in the world, we found our way on foot to the Church of Santa Maria delle Grazie, and ancient church with brick front, adjoining which is the refectory of the Old Convent. Here we saw the famous painting of Leonardo da Vinci (1452 – 1519) representing the “Last Supper”. It is in a ruinous condition owning it is said, to the defective structure of the wall on which it is painted. It was executed in the year 1498. The monks have cut a doorway through the wall, and the top of it takes out a large piece of the table cloth in the centre of the picture. This door is now blocked up. From what I had heard I expected to find the picture much more faded than it really is. There were ten or a dozen copies in the room, of various sizes and degrees of merit, but not one of equal excellence with my own chromo-lithograph. At the other end of the refectory which is a plain, ugly and dirty room of considerable dimensions is another wall painting of equal size with the “Coenacolo”. It is a “Crucifixion” painted by Montorfano in 1495, and is well worth examination being a fine composition in a good state of preservation.

Having done our duty in this direction we took luncheon in a very humble Trattoria where however we were well served for a little money and had a bottle of the best “grignolino secco” we had in Italy. Walking on without any special purpose beyond that of seeing the place and people we came to the Campo di Marti – “The Champs de Mars” where, it being a holiday many of the lower classes were enjoying themselves – riding on wretched horses around the field, playing at bowls, listening to street musicians and vendors of quack medicines, having their fortunes told by garrulous women of a somewhat, but not very, gipsy cast of countenance, buying and selling cakes and other unwholesome looking “eatables”, and in general enjoying themselves in a “mild” and I may say rational manner. We had not been seated in a tramcar two minutes before we came to a large circular building marked “Panorama”, so we stopped the conveyance, descended and entered. We found it a very well executed panorama of the Battle of Sorrento – very similar to that of the Siege of Paris in the Champs Elysees.

We saw the modern “Arena” or Circus and the beautiful triumphal arch “Arco della Pace” (similar to that at the top of the Champs Elysees) in the distance, and reached or hotel in time for table d’hote and having been on foot nearly all day were very glad to rest. However, after dinner I walked out again to the Arcades which were crowded with people nearly all of whom were men, and purchased some photographs.

The King of Italy (Humbert) and his wife are expected here tonight from Vienna, where they have been on a visit to the Emperor of Austria. There is to be a grand performance at the Opera in their honour, and it is hoped they will be present.

The bells were ringing almost all night and all the morning until daylight came upon Milan and sent its inhabitants to quieter avocations. I wished heartily many a time as I tumbled about in my bed that they would at least let the bells alone at night and lay straw down in the streets between 12 and 9 if they must have carriages running about at unseasonable hours. I wondered whether the Milanese made as much fuss on every Saint’s day as on “all Saints’ day”.