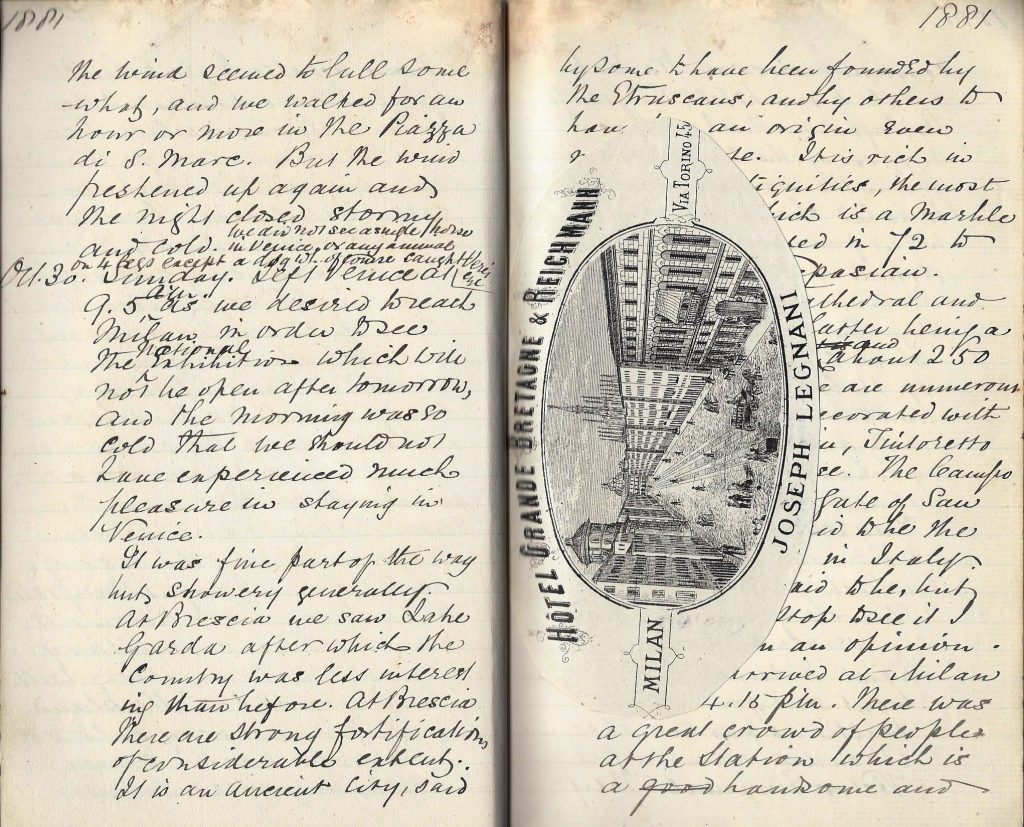 Left Venice at 9.5 am as we desired to reach Milan in order to see the National Exhibition which will not be open after tomorrow, and the morning was so cold that we should not have experienced much pleasure in staying in Venice.

It was fine part of the way but showery generally. At Brescia we saw Lake Garda after which the country was less interesting than before. At Brescia there are strong fortifications of considerable extent. It is an ancient city, said by some to have been founded by the Etruscans, and by others to have had an origin even more remote. It is rich in Roman Antiquities, the most valuable of which is a marble temple dedicated in 72 to the Emperor Vespasian. There is an old Cathedral and a new one, the latter being a handsome edifice of white marble about 250 years old. There are numerous other churches decorated with paintings by Titian, Tintoretto and Paul Veronese. The Campo Santo beyond the gate of San Giovanni is said to be the most beautiful in Italy. So are others said to be, but as I did not stop to see it I cannot form an opinion.

We arrived at Milan about 4.15 pm. There was a great crowd of people at the station which is a handsome and commodious one. We took a cab to our hotel, the “Grande Bretagne”, in the heart, as I suppose, of the city, not far form the Cathedral. Having washed and brushed up we went for a walk before dinner and saw the chief Roman remains of the city viz: the Colonne di S. Lorenzo which consist of a row of 16 lofty fluted columns with Corinthian Capitals and an Entablature and probably formed the front of an ancient Temple. They serve as a kind of portico to a quadrangle which opens before the Church of S. Lorenzo.

We returned to our hotel dinner and then went out for another walk as far as the arcades named after Victor Emmanuel. They were brilliantly lighted, and are the finest I ever saw. There can be no doubt they are the finest in the world, being extremely wide and lofty, built of (I presume) white marble, beautifully decorated and containing very handsome shops. They are on the left hand side of the Cathedral, two running East and West a nd the other North and South starting from the point of junction of the two. The one is double the width of the others, has shops on each side and has two shorter ones of equal height at its North end. Those running East and West are open to the Square and face the Cathedral. I was told that it was intended to build similar arcades on the opposite or South side of the Piazza.