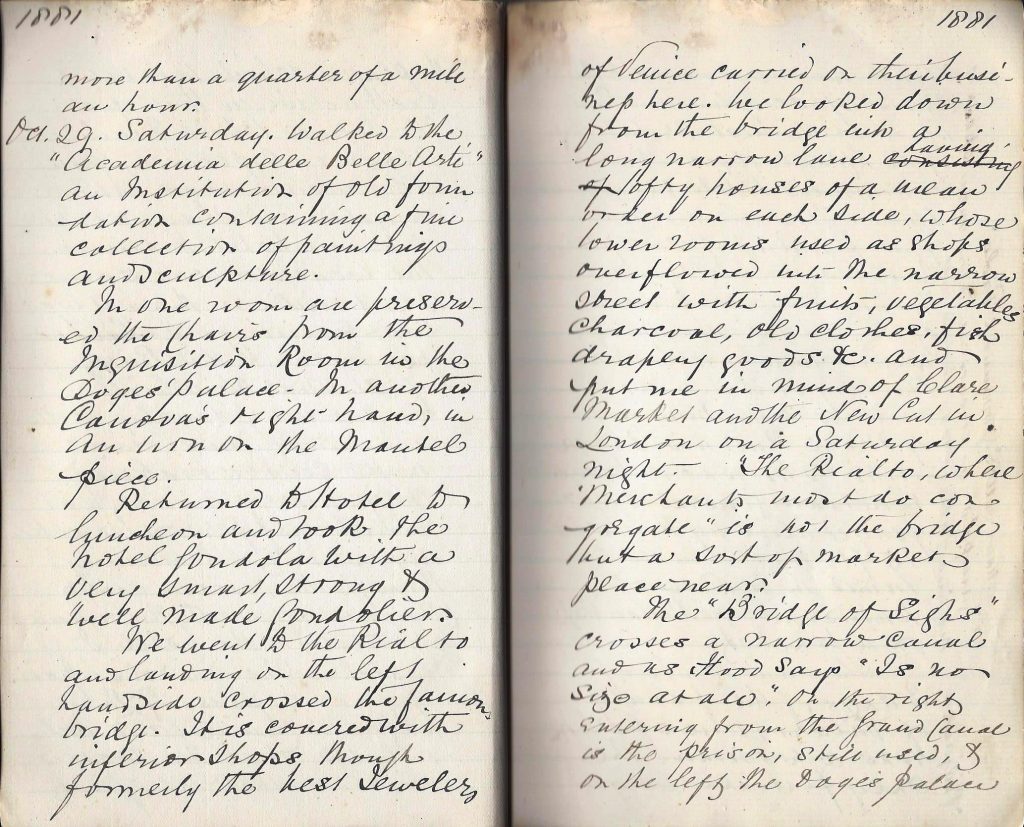 Walked to the “Academia delle Belle Arte” an institution of old foundation containing a fine collection of paintings and sculpture.

In one room are preserved the chairs from the Inquisition Room in the Doges’ Palace. In another Canova’s right hand, in an urn on the mantelpiece.

Returned to Hotel to luncheon and took the hotel gondola with a very smart, strong and well made gondolier.

We went to the Rialto and landing on the left hand side crossed the famous bridge. It is covered with inferior shops, though formerly the best jewelers of Venice carried on their business here. We looked down from the bridge into a long narrow lane having lofty houses of a mean order on each side, whose lower rooms used as shops overflowed into the narrow street with fruits, vegetables, charcoal, old clothes, fish, drapery goods etc and put me in mind of Clare Market  and the New Cut  in London on a Saturday night. The Rialto, where “Merchants most do congregate” is not the bridge but a sort of market place near.

The “Bridge of Sighs” crosses a narrow canal and as Hood says “Is no size at all.” On the right, entering from the Grand Canal is the prison, still used, and on the left, the Doges’ Palace.

Thence we were rowed to the Church of Saints John and Paul which is of the best architecture of the Middle Ages. It was commenced 1246 and completed 1430. There are numerous fine paintings and sculptures here – with highly ornate monuments to several of the Doges, many of whom were interred here. One very striking monument is to the memory of Marc Antonio Bragadino who was a brave Venetian general and was flayed alive by the Turks 1571. His skin is contained in a vase of handsome workmanship on a bracket.

There are tombs of 3 doges of the family of Valiero, one of whom was a woman, the only female Doge. There is a fine painted window the only ancient one in Venice.

A monument to the Doge Vendramenus  is of the finest renaissance work and bears date 1478.

Adjoining this Church was a fine chapel built to commemorate the victory of Lepanto  in 1571. It was destroyed by fire in 1867. Some of the high reliefs in white marble which adorned the walls are still in situ and are of the highest style of art.

In this church we were shown the “tomb of John the Baptist.”

We left this church with regret and visited the Venetian glass and mosaic works where we saw a man making glass beads. He made one to my order with the initials I.R.S. for Isabella Rosa Stevens and one with those of Vere J. Vere.

The pretty glass mosaics for brooches etc were in process of manufacture. The workman had a design before him, and a sort of pad on which was placed the ground work of the brooch in a kind of cement. Beside him he had a number of very slender glass rods of various colours perhaps from two or three inches to a foot in length. Making a notch in one with a small sharp file, he broke off the required piece with a pair of pliers and stuck it into the cement. The various pieces thus stuck in close together and following the pattern he had to work by soon grew into a very pretty ornament. When the cement has become sufficiently hard by fire or otherwise the surface of the mosaic is polished and mounted as a brooch or otherwise.

In the ware rooms we were shown a variety of ornaments, figures, mirrors, mosaic tables etc, made by this firm. Most of them were very artistic and beautiful. I was specially struck with the figures in wood of negro boys and girls holding candelabra. They were painted in a very gorgeous manner, and were suitable for the foot ??? of a stair case. There was much gold about them and they probably give a not incorrect idea of the manner in which the ancient Venetian merchants dressed their favourite household slaves. But I do not, on the whole, admire the Venetian mirrors with glass frames. I think a gold frame looks very much better, as it affords a more striking contrast to the bright silver of the mirror and therefore defines it better.

Our gondolier then took us to see some Bronze works, but as these were not very interesting, being apparently nothing but a shop for the sale and repair of bronze articles I fancy he must have been offered a commission on sales effected to persons brought by him.

It was getting somewhat late in the afternoon, and the day was threatening to close with a cold wind and rain, consequently we were not able to go to the Arsenal. We went, instead, to the Isola S. Giorgio, which lies near the junction of the Grand Canal with the Canale della Giudecca. Here we landed and examined the Church of S. George Maggior. A youngish Dominican Monk showed us over the building with which we were much pleased. Over a pinch of snuff he told us that he and one other were the only members of his order there now, the monastery having been suppressed, and the rest of his brethren having emigrated to Austria. The building is now used as a Military Church in connection with the Barracks on the Island.

We found it very cold as we rowed back to our hotel; but after dinner the wind seemed to lull somewhat, and we walked for an hour or more in the Piazza di S. Marc. But the wind freshened up again and the night closed stormy and cold. We did not see a single horse in Venice, or any animal on 4 legs except a dog which of course caught Vere’s eye.