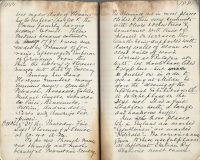 We passed through numerous tunnels and much beautiful mountain scenery. The Apennines are in most places clothed to their very summits with olives and other trees and sometimes with vines etc planted on terraces, the earth being supported with dwarf walls of stone or close rails of wood.

Arrived at Bologna at 4.15. We should have liked to stop here – but pushed on in order to get a day at Milan before the closing of the National Exhibition which is to take place on the 31st inst. It is a fine station with a large and handsome buffet.

Here those places which in England are marked “Gentlemen” are marked “Ritirate” – the various names given to these useful places at different Italian Railway stations must cause no little bewilderment at first to those foreign travellers who know nothing of the language.

At 11.10 pm we reached Venice, our train being somewhat late. Stepping from the platform of the Railway Station into a gondola omnibus was a new sensation and the “drive” through the silent watery ways to our Hotel “the Grand” on the Grand Canal, was a newer still. There were two men to row or rather scull, one at each end of the mourning-coach-without-wheels-looking-craft, who made very little noise, communicating what they had to say to each other in a low tone of voice and with few words as though fearful of awaking the slumbering echoes of the past in those silent and, at this time almost deserted canals. They were dressed in a sea-faring uniform, the Gondola belonging to the hotel to which we were bound. Venice is certainly the quietist city I was ever in. The Railway Station is on the Grand Canal, but we were taken, as a short cut, I presume through several of the smaller ones, and soon found ourselves at the door of the hotel around which were several blue posts rising about 6 feet out of the water. The gondoliers and the Hotel porter the latter of whom came out to meet us in a neat uniform assisted us out of the gondola very carefully, and we were soon shown to our rooms which were rather high up and not by any means so good as those we had had in other parts of Italy. However, we did not make any complaint as it was very late, and we thought it probable the hotel might be full. We therefore ordered supper and were soon asleep, and were not disturbed by the noises of late revellers as in Rome nor by the rattling of shaky cabs along nobbly roadways as in Florence, nor by the thwacking of cabbies’ whips as in Paris.