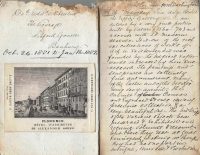 Fine day. Visited the Uffizi Gallery which we entered by a very fine portico built by Vasari (1560 – 74) and adorned with 28 modern statues. It is one of the richest collections of works of art in existence, and was founded by the Medicis and afterwards increased by their successors. The paintings and sculptures are extremely fine and numerous, many of the latter and of the bronzes being very ancient. The cabinet of Cameos and Engraved Stones is a very precious collection and a very beautiful one. The histories of the various objects here preserved and exhibited would require volumes to recount but there they rest as quiet and innocent, looking as though they had no part in intrigue, murder and revolution.

The attendant found me one object which was wrongly numbered in my catalogue, a ring bearing a sphynx which was used by the Emperor Augustus as a seal and which was found in his tomb. It is a very large and cumbrous ring and was probably worn only when required to be used as a signet. He also pointed out to me a medallion portrait of Savonarola in cornelian. (Burnt A.D.1498 on site of Neptune fountain near Palazzo Vecchio.

In the Hall of the Portraits of Painters is the famous Medicaean Vase on which is sculptured the sacrifice of Iphegenia, a magnificent Greek work.

The Cabinet of Gems contains an immense collection of very valuable specimens – each of which was doubtless an interesting history of its own – I was much struck with a head in turquoise, the eyes of which consist of two diamonds, there were many large pearls – gems of all kinds, busts carved in rock crystal, and lapis-lazuli vases.

Here we met our American friend whom we saw at Naples. I learnt from him that the ancient intaglios are polished in the inside but in the middle ages the art of doing this was lost. It has now been recovered; so that the age of these works of art can be pretty well ascertained.

In this gallery we saw the famous Venus of the Medicis, a fine specimen of ancient Greek art. On its base is an inscription in Greek to the effect that it is “the work of Cleomenes the son of Apollodorus, the Athenian”. It was discovered in the ruins of Hadrian’s villa near Tivoli. Near this is another piece of ancient Greek sculpture commonly called Il Arrotino, the whetter, consisting of the figure of a man in a stooping posture whetting a knife on a stone – the meaning of it is not known.

The Wrestlers is also a fine piece of ancient work.

Leaving the Uffizi we crossed the Ponte Vecchio and made our way to the Pitti Gallery. A corridor communicating between the two crosses this bridge, but was closed for repair. The payment of one franc per person covers admission to both palaces.

The Pitti is a fine palace and contains 500 paintings, all of great value, most of them being real master pieces. There are also some sculptures and many very handsome marble tables. I noticed particularly the celebrated Madonna della Seggiola / Sedia (Virgin of the Chair) by Raphael, 1511 – 1516.

In the Hall of Flora we saw the celebrated Venus by Canova, which I much prefer to the Venus dei Medicis.

Leaving this gallery we walked to the Piazzale di Michel-Angelo, the Boboli Gardens which adjoin the Pitti Palace and are very fine, not being open to day, this Piazzale is a large open space on a sort of table land at the eastern side of the town overlooking the river. It is well laid out in walks and drives and planted with shrubs, flowers and trees. The top is gained by good winding paths of easy slope, adorned here and there with grottoes, statues and fountains. At the bottom, near the riverside is a huge and ugly brick tower, which I understood is called the “tour di San Nicolo” and is a portion of the ancient fortifications. On the top of the Piazzale is a statue of David – and a magnificent view over the city, with the Apennines clothed with vineyards, olive trees, villages and villas in the background.

Here we found an ancient Church of the Franciscans which was undergoing repair. It was built by Cronaca, and Michael Angelo called it La bella Villanella.

The hill is called San Miniato, from the saint who was martyred here. The basilica of San Miniato, not far from the church of the Franciscans is a fine building erected in 1013 by Bishop Hildebrand and aided by the Emperor Henry ii. There are some good paintings and some frescoes some of which are in a good state of preservation. The tower was built in 1519 and was preserved by special care of Michael Angelo from the dangers which it was exposed during the siege of Florence at which ?1530 time he constructed the fortifications which are still to be seen.

Under the altar of the marble chapel forming a “Confession” are preserved the ashes of San Miniato and other martyrs.

In the eastern wall are some windows made of semi-transparent marble.

On the outside of this Basilica is a most beautiful but not extensive cemetery used by the wealthier classes of Florence the revenues of which have greatly contributed to the keeping the Church in repair.

This afternoon we visited the Church of the Medicis called San Lorenzo which possesses some fine tombs and statues. and also a Church of Santa Maria Novella, which was much admired by Michael Angelo, who called it “his bride”. It was founded in 1279. As the arches of the nave in this church approach the high altar they become smaller, and optical illusion made use of by the architects to increase the effect of the perspective. It contains an immense number of pictures and statues. The church belongs to the Dominicans, who have a Pharmacy here famous for Sweet Essences and odoriferous waters, and dispense all kinds of drugs to the public.

Florence was founded by a colony of Roman soldiers sent thither by Octavianus after the victory at Perugia. In the time of Charlegmagne it became a Duchy. But the Dukes became extinct about 1115. When the Countess Matilda, who was daughter of —— it was ceded to the pope. But it was a feud of the Empire. Hence arose a quarrel between the Emperor and the pope. The Guelphs took the side of the latter, the Ghibellines of the former. In 1215 Buondelmonte a Guelph was assassinated and 42 Guelph families swore to avenge his death. When Frederick ii Emperor conquered the pope in battle, the Guelphs were expelled but were recalled by the people in 1250. Ten years after, the Guelphs were again driven out. In 1287 Charles d’Anjou who had been made King of Naples by the Pope drove out the Ghibellines and restored the Guelphs. The Ghibellines never again became masters of Florence. Then the Guelph party became divided into “Blacks” and “Whites”. Between them the poet Dante was driven into exile, 1321 and died.

The Florentines applied to Robert, King of Nples who, in 1342 sent Walter of Brienne as governor of Florence and he was elected by the people governor of the city for life. He was however expelled in te following year when the city was harrassed by the rival factions of the Abizzi and Ricci. In 1348 the city was almost depopulated by the Plague.

In 1351 – 3 the Ghibellines attacked the city but were defeated. In 1378 an insurrection called Ciompi took place and the government passed into the hands of the people. Now the Medicis arose Cosimo Medici Primus “the Father of his Country” became duke. A fine equestrian statue of him stands in the Piazza Signoria near a handsome marble fountain of Neptune in his carriage. He was a popular citizen and a princely merchant. In 16th century the Republic fell, one of the Medicis was made duke of Florence by the Emperor Charles V, the Cosimo family having become extinct. These Medici became extinct in 1737 and were succeeded by Francis of Lorraine, afterwards Emperor of Germany. From this time the history of Florence merges into that of Tuscany.