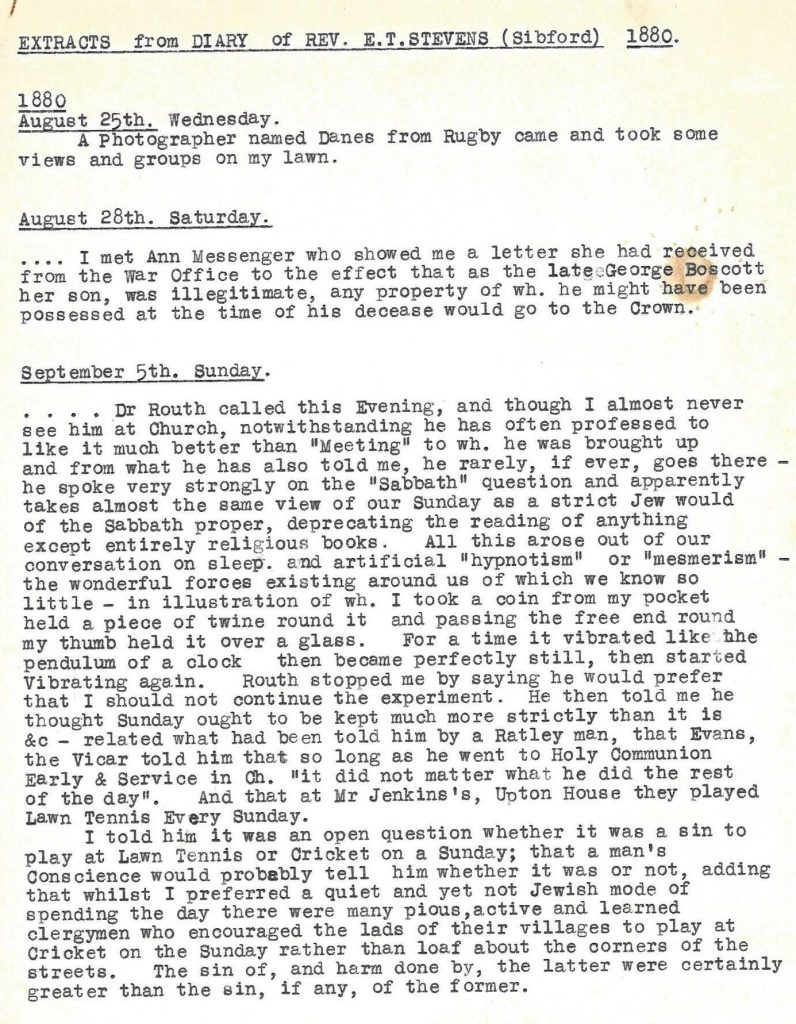 Dr. Routh called this Evening, and though I almost never see him at Church, notwithstanding he has often professed to like it much better than “Meeting” to which he was brought up and from what he has also told me, he rarely, if ever, goes there – he spoke very strongly on the “Sabbath” question and apparently takes almost the same view of our Sunday as a strict Jew would of the Sabbath proper, deprecating the reading of anything except entirely religious books. All this arose out of our conversation on sleep and artificial “hypnotism” or “mesmerism ” – the wonderful forces existing around us of which we know so little – in illustration of which I took a coin from my pocket held a piece of twine round it and passing the free end round my thumb held it over a glass. For a time it vibrated like the pendulum of a clock then became perfectly still, then started vibrating again. Routh stopped me by saying he would prefer that I should not continue the experiment. He then told me he thought Sunday ought to be kept much more strictly than it is and related what had been told him by a Ratley man, that Evans, the Vicar told him that so long as he went to Holy Communion early and Service in Church, “it did not matter what he did the rest of the day”. And that at Mr. Jenkins’s, Upton House, they played Lawn Tennis every Sunday.

I told him it was an open question whether it was a sin to play at Lawn Tennis or Cricket on a Sunday; that a man’s Conscience would probably tell him whether it was or not, adding that whilst I preferred a quiet and yet not Jewish mode of spending the day there were many pious, active and learned clergymen who encouraged the lads of their villages to play at Cricket on the Sunday rather than loaf about the corners of the streets. The sin of, and the harm done by, the latter were certainly greater than the sin, if any, of the former.