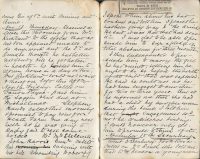 Went to Banbury. Took Rosa. Called on Dr Routh who told me that William Reason a young man of Sibford Ferris was ill – his lungs being to a certain extent consolidated. He said wine would do him good and I promised to send him some.

Ann Fox’s brother, a man living at Wolverhampton as horse keeper called this evening about his sister. He had been trying to get Sally Green out of her cottage so as to put his sister there to live and that the shop next door might be let and the rent thereof go to Ann’s support – but he was unsuccessful – and Bonner told him he could not well turn Sally into the street. He said Ann was not fit to be alone – that since her illness she had given way to drink very much – that she was not compos mentis – but that they did not know what to do with her as she was very obstinate.

John Harris junior called this evening – as I sent for him this morning to pay him his bill. He had not made up his mind to marry Ann Coleman.