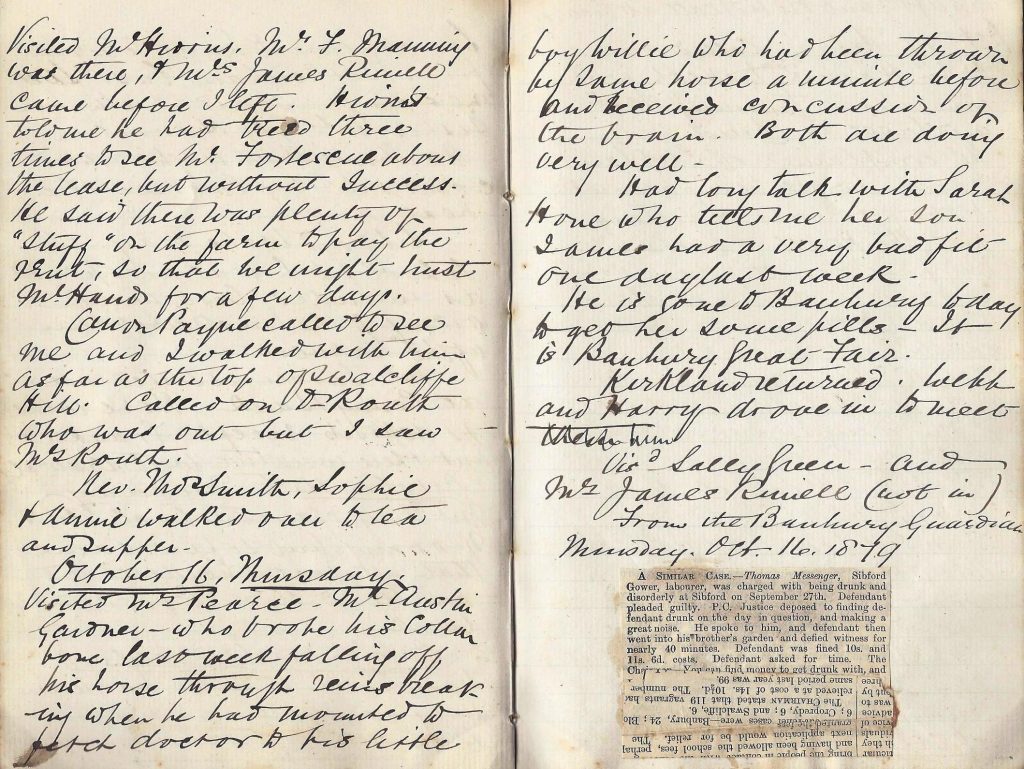 Visited Mrs Pearce, Mr Austin Gardner – who broke his collar bone last week falling off his horse through reins breaking when he had mounted to fetch doctor to his little boy Willie who had been thrown by same horse a minute before and received concussion of the brain. Both are doing very well.

Had long talk with Sarah Hone who tells me her son James had a very bad fit one day last week. He is gone to Banbury today to get her some pills. It is Banbury Great Fair.

Kirkland returned. Webb and Harry drove in to meet him.

Visited Sally Green and Mrs James Rimell (not in).

Mr Boucher was in Sibford this afternoon but did not call at Vicarage.

A SIMILAR CASE.—Thomas Messenger, Sibford Gower, labourer, was charged with being drunk and disorderly at Sibford on September 27th. Defendant pleaded guilty. P.C. Justice deposed to finding defendant drunk on the day in question, and making a great noise. He spoke to him, and defendant then went into his brother’s garden and defied witness for nearly 40 minutes. Defendant was fined 10s. and 11s. 6d. costs. Defendant asked for time. The Chairman—You can find money to get drunk with, and you must pay now.

Have received instructions from Mr. S. Hands, who is leaving the Sibford House Heath Farm,

TO SELL BY AUCTION,

ON MONDAY, the 27th day of October, 1877, the Live and Dead Farming Stock, a portion of the Household Furniture and other Effects, the whole fully described in catalogues to be obtained at the place of Sale, and at the Offices of the Auctioneers, Shipston-on-Stout and Great Wolford.

Sale to commence at 12 o’clock.