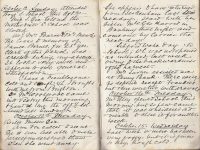 Ann Fox called to see me – she is even less able to make herself understood than when she went away. She appears to have returned from Beckenham last Wednesday. Staid with her sister Mrs George Harris in Banbury that night and come out by carrier the next day.

Sibford Wake Day. No school; which was not opened as intended last week owing to the backwardness of the harvest.

Mrs Turner assisted me at Penny Bank. There were no deposits except Frankie’s, but there were two withdrawals.