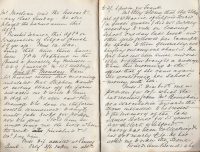 Mr Hiorns called this morning and stated that Stephen Hands is carting straw off the farm and asked me to write to him and stop it. He also said the drainage to be done on the farm would be commenced today and would take 3 weeks for portion now to be done. I told him he must bring me the bills when the work is finished and I would pay him.

Miss Dix assisted at Penny Bank. Only 3/6 taken in addition to 2/- I put in for Frank.

Mr Elley told me that the eldest girl of W. Harris, of Sibford Ferris (a quasi quaker) did not curtsey according to rule on leaving school one day last week – and other girls followed her example. He spoke to them generally, not singling out anyone about it. The girl has not been since, and one of her brothers brought a message to him this morning to the effect that if she came again she would bring her school money with her.

Miss S. Dix brought me a p.o.order for 10/- which she had received from Mr Bourchier as a contribution towards the stone intended to be erected to the memory of the late James Barnes for 25 years parish clerk of Sibford.

Harry has been collecting and has got nearly £4. He has asked me to order the stone.

Visited Ann Bond who appears to be breaking up fast. She is 74 years of age. Her daughter Emma Tarver says she must have help as she is not strong enough to lift her in and out of bed.

A married daughter of Ellen Hones was there. She lives in Bedfordshire – talked about her going to church regularly with her husband. I told her she should endeavour to persuade her mother to send her little brothers to the church Sunday School where they used to go and where I taught them myself until she for some peak or other took them away and sent them to the Methodists’ Sunday School.

She told me that her sister who emigrated to New Zealand a little over a year ago got married when she had been out less than 3 months – has a child and is doing very well.

Visited Thomas Coleman’s, John West’s. His wife showed me their garden behind the house – which looks very well – as do the others adjoining. She asked me to give her boy a pair of boots. I said I could not, as I gave him, under exceptionable circumstances a pair some time ago. As she has 4 children at home earning nothing and her husband was out of work a great deal during the winter I gave her 2/6 toward a pair.

Visited Thomas Henry Hone’s wife – Charles Legge’s and spoke about the irregularity of the boy Jesse Lively’s attendance at School. She said he had not been well.

Visited Sarah Hone whose sone James is away from work again unwell though not on his club. I told her to send for a little wine for him which might do him some good.

Visited Ann Fox, who was in bed. She answered  me one or two questions but then began to mumble again. She said she could not recollect her prayers. I much fear her brain will be permanently affected.

Ann Payne was in charge of her – and gave me information to fill up a form I had received from the War Office respecting her deceased brother Daniel Padbury.

Visited Mr and Mrs Hitchcox – called at William Webb’s in passing – saw his wife and his daughter Charlotte, who has been at home ailing since Michaelmas last.