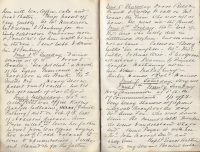 Received a letter yesterday from War Office stating that George Williams (Daniel Padbury) died on February 9th last of Addison’s disease. Ann Payne called today with letter her father had received from War Office saying there was £8 odd balance to come to representatives. I wrote and claimed it for the father.