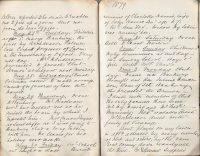 Drove into Banbury and brought out Rev Julius Henderson, Vicar of South Banbury who preached the sermon. I dined with members of Club. The only farmers there were Mr Henry Hiorns and Mr Frederick Manning. The Doctor was also there. Mr Henderson dined with family at Vicarage.

Band played on my lawn in afternoon attended by many members of club and others, but the rain was coming down heavily all the time. Mrs Stevens supplied them with tea, coffee, cake and bread and butter. Things passed off very quietly. As Mr Henderson had to return to Banbury for an early celebration tomorrow morning and I could not let him walk home in the rain, I sent Webb to drive him to Banbury.