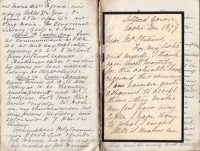 Easter Monday. Divine Service at 9.15 am.

Vestry at 10.30. The only persons present were Mr Woolgrove, Frederick Inns, Charles Barnes and myself. Mr Hitchcox, my churchwarden not being present, the Vestry was adjourned to 7 pm on Friday.

Job Harris’s mother complained that I never visited her – I told her I had frequently called at her house but found no one at home. She seemed inclined to doubt my having done so as she so seldom went out. I told her I kept an account of my visits and my book would remind me. I told her that the present I had sent her at Christmas might have been taken as an indication that I had not forgotten her and that persons who were well in health and able to get out should come to church and not expect a clergyman to waste his time in gossiping with them whilst there were so many sick to visit.