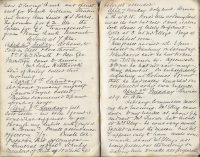 Rosa’s turn at Penny Bank but as she had cold I took it alone.

Took classes of lately confirmed girls at 3 at Mr Elley’s. Boys at 7 at School room.

New grates arrived which I purchased in Banbury on Saturday. John Harris said he had broken one – told Marion so – afterwards told me he had not said anything about it. On subsequently enquiring at Robins’s I found that he had really smashed one and replaced at his own expense.