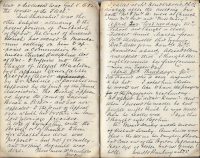 Visited Job Harris who is still confined to his bed. I asked him whether he would not like to have the prayers of the congregation next Sunday – he replied he “didn’t know” – and when I pressed the matter he said people might think he was worse than he really was. I said what I thought right and left him.

Visited Edward Scruby and the Widow of Richard Scruby. Ann Lines was there – she told me her daughter Rhoda had come out of the Horton Infirmary. Her eye is better but not quite well.

Went to Banbury with Mrs S. Went to Savings’ Bank and opened accounts for Frank William Stevens and Mary Ann Lines of Sibford Ferris – the former for £2.14 , the latter for £1, transferred from Penny Bank account.