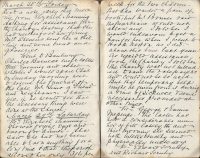 Visited Elizabeth Manning – who was frying eggs and bacon for dinner. She said she had not been able to earn anything for a long time and that the parish allowed her only 3/6 per week for the two children, that Ada wanted a pair of boots, but Mr Bonner said the guardians would not allow any. I told her I would endeavour to get a pair for her when I went to Hook Norton as I did about this time last year. As regarded assistance from the Charity I told her the Charity was not intended to save the ratepayers and could not be so used. But that temporary help might be given from it during a time of sickness and some necessaries provided at other times.

Visited George and Emma Messenger. The latter has had a considerable number of fits lately and this morning she seemed both intellectually and physically unsteady.

Visited Edward Scruby and Richard Scruby. The latter seemed in considerable pain and weakness from suppression of urination, but said he was rather better than yesterday.

Visited Joseph Holtom intending to see his wife nee Bertha Keene – but she was not at home.

William Stevens of Etchill Farm called this evening and asked me to help some people living in “New Barn” belonging to Mrs Pettipher. The woman was confined a few weeks ago, and caught cold by going out rather too soon so that she has now bad breasts. The man is laid up with a bad foot. They have not been here very long having removed here from Brackley. He said they were very poor ignorant creatures, that his wife did all she could for the woman who has one or two children besides the baby. I said I would go and see them as soon as possible. I was favourably impressed with my namesake who seemed from his conversation a very respectable and religiously disposed man.

Mr Hiorns called to see me about the Heath Farm. I told him he had better look over it and think over the matter, that the general notion of the Trustees was that the farm if in fair order would be worth £170 per annum, that they would let it at that rent on lease to a respectable tenant, and would return in manure to be expended on the land £40 the first year or thereabouts, £30 the second, and so on for the first few years.