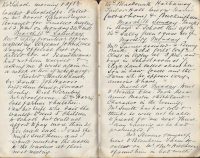 Received reply from War Office respecting Sergeant John Lines saying official list of killed, etc at Isandlwana had not been received and asking me to write again in a week or two if necessary.

Visited Charles Lines, Dr Routh, Job Harris, Widow Ann Lines, Dorcas Scruby, Richard Scruby, Mr Woolgrove. William Harris, late farmer and butcher; saw his wife who said she wanted to send 5 children to school but could not afford to pay more than 3d per week each. I said she might send them, and I would mention the matter to the trustees at their next meeting.