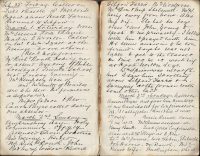 Called on Canon Payne and gave him numbers of my candidates for confirmation, viz. 31 altogether. Last time it was 17 only.

Buckingham, who is still laid up with a bad foot. Gave him 1/-. He gets 8/- per week from his club and 3/- from parish. One boy is at home earning his living. One girl is out at service. Three children at home who ought to go regularly to school, but don’t. I spoke to the father about the matter and he said he would tell his wife to see that they went more regularly.

Met Charles Hands and spoke to him about the allotment rent, which he promises to pay. Took Boys’ Confirmation Class at school at 6 pm. W. Spicer was there.

It was the Quarterly Club night.