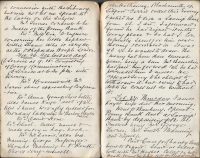 Visited and conversed with Mrs Jarvis about approaching confirmation. Visited Anna Young, who is better. Also James Kaye – account of which visit I have wrongly entered for Monday last; also Mr Barker’s report on school.

John Hathaway, Blacksmith of Sibford Ferris called this evening and asked me to sign a Savings’ Bank form which I did. I afterwards found he had signed it in the wrong place and so had I. Consequently I sent for him next morning and corrected it. It was £3 which he wanted to draw. The money had been there several years, being a sum Mr Bourchier had paid him for work and which he had persuaded him to invest. He appeared sorry to be obliged to withdraw it, but owing to bad debts he could not do without it.