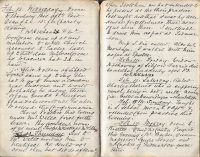 Sent to Mr Wells inviting him to breakfast. He could not come then but did so afterwards, when I told him we had intended to be present at the Choir practice last night and that it was by accidental forgetfulness that none of us were there. I sent Webb to drive him as far as Tadmarton.

Miss S Dix called. Also Mr Montagu. I walked with him as far as Epwell.