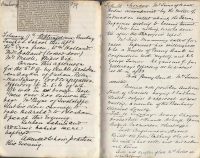 Mr Sims of Hook Norton accompanied by the Miller of Tadmarton called about the Farm, the former wishing to become tenant. I told him nothing could be done till after the surveyor’s report.

Mr Fred Manning called for rates. Expressed his willingness to be a Trustee of Penny Bank in conjunction with myself and Mr George Turner. He gave me 1/- for yesterday’s offertory as he was not at church in afternoon.

Received note from Rev Ambrose Short of Bodicote saying I had been elected, subject to approval at next meeting, a member of the Banbury Clerical Society.